Donousa or Denousa or Stenoza or Spinoza or Viridem… Lots of names emerging throughout the centuries- and plenty more which we will probably never learn. For such a tiny place in the middle of the Aegean Sea. Just a dot on the map. In the mind of those who know her, a sheet anchor to grab from in the winter of their everyday life. In the heart of the people who live there, their homeland. And Life. And a Land of paradise. 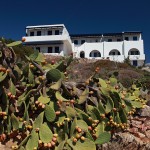 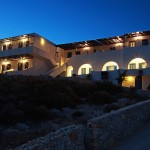 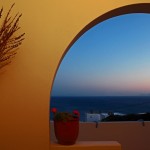 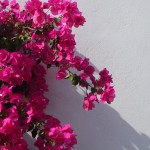 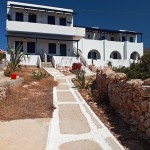 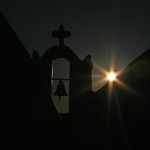 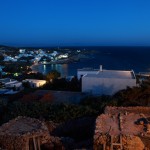 Her history is long and mysterious. Archaeological findings in Vathi Limenari, dating back to the Geometrical Era, witness that centuries have been flowing like water in Donousa. Contributor to the Cycladic civilization, located very close to Keros (where the famous “harpist” and “double-flute player” statuettes were found), Donousa is referred to as a place of exile during the Roman Era, as a hideaway for pirates later on and, at the beginning of 1800, as a summer settlement for shepherds from Amorgos.
It is said that Donousa was first inhabited around 1830. However, there is only a little information preserved. Memories, conveyed from mouth to mouth, have become very dim in the tired eyes of the elderly who are almost one century old.
At the beginning of 1900, the island had approximately 3000 inhabitants. Large families used to live in the low stone houses. Kampos (today’s Stavrós) has always been the capital of the island since then. Mesaria (Haravgi, as called in the past), Mersini and Kalotaritissa (or Kaloterousa) were, and still are, the other villages of Donousa.
The mines which had been operating in Kedros (or Kentros, as the local call it) until 1938, would provide iron, aluminium, copper as well as jobs for a number of families.
The cultivations of onions and tobacco significantly helped the island inhabitants up to the 50s.
Wars passed through this land, too (who can escape?), with bombardments, starvation, the Italian occupation, the German occupation, the English allies…
The decade of the 60s came with poverty, desertion, immigration… Working hands would become fewer and fewer and the fields would be abandoned and devastated. Another twenty hard years would follow….
A little while before electricity came, around 1980, the first tourists had started visiting the island. Then the port was built and life changed in Donousa…

However, what will never change here is the way the sun rises and sets, while painting the sky with so incredibly many colours that your eyes cannot catch all at once.The raging wind, which when blowing clears up the horizon from Patmos to Santorini, will never cease. The open sea which, when calm, abounds with small boats and caiques (special fishing boats), will not stop even for one moment mellowing  the soul and calming the spirit. And the sky in the night, giving the impression that it bows from the weight of so many stars, will always accompany our dreams and chase our nightmares away…

In the winter, Donousa goes to bed early and rises early – just like the sun. But in the summer, she almost never sleeps. On one hand, ships arriving before dawn; on the other hand feasts making you forget time…On one hand, the moon painting the sea silver; on the other hand, the well promising sunrise…There is always a reason for one to “count” days and nights in Donousa differently.

Stavrós (=Cross) is the largest settlement of the island and has taken the name after the church of the Exaltation of the Holy Cross (Timios Stavrós), which was first built in the village in the late 80s, near the creek. However, the church was swept away by a heavy rainstorm and destroyed. Sometime later, a fisherman found the icon of the Exaltation on a beach of Amorgos, raised money and the church was rebuilt in 1902, at the exact spot where it stands today. Ever since then, every 14th September, Donousa wears her Sunday best and celebrates the Exaltation of the Holy Cross, while a great number of people gather here from the surrounding islands to bow  before the icon and celebrate the religious festival on the eve.
In Stavrós, there are enough rooms to satisfy the needs of visitors during the summer months. However, for the “peak holiday season” between 15th July and 15th August it would be wise to book in time, so as to avoid any trouble.
Everything here is close. At “Kima” (=wave), one can enjoy their coffee right next to the jetty, buy the necessaries, drink a glass of beer or, if lucky, taste the local kid meat. It is here where you will meet all the locals having their afternoon coffee. This place will remind you of what the Greek “kafenio” (traditional café) used to be like some decades ago. Friendly greetings, chats, stories, “fresh” news, “old” news….Everything found here.
Two steps further is “Kapetan Giorgis” (=Captain George). The ouzo taverna with music, dancing, singing and good company are the essential additional “ingredients” for having fun here…A bit further, stands the “Meltemi” (=annual northern wind). Delicious food, both for lunch and supper. Everything you feel like eating, served right by the sea. At “Corona Borealis” two steps from the sand, you can enjoy breakfast, excellent food, relax in the shade of tamarisks (sea trees) or a drink.
If you are craving for fresh fish, simply ask for it.  All tavernas will see to your desire, as long as conditions allow for it. In “Pera Panta”, the other half part of Stavrós (the village is divided by “the creek” and the seaside), lies the “Iliovasilema” (=sunset), a taverna which offers spectacular view and another great option for excellent food.

Opposite the port, stands “Skantzohiros” (=hedgehog), a small pub made of stone, open from morning until ….the next morning. Chess, backgammon and other board games, superb music during the ….siesta afternoons….the ideal time for a deliciously rich and refreshing ice-cream…. And, of course, don’t forget to try  their unique crepes …..
Next to the “Meltemi”, you will find the bakery with all sorts of delicacies. The “galaktoboureko” (milk pie) is perfect.
For any other necessities (newspapers, magazines, cigarettes, souvenirs etc), you go to “Pothiti” (=desirable), by the sea strand. There is also a mini market, near the Church of Stavrós.

*Every Monday, Wednesday and Saturday, The legendary “Scopelitis” of the Minor Cyclades arrives at and departs from the port of Donoussa. Departing at 06:00 in the morning from Katapola, Amorgos, it arrives in Donoussa at about 08:00 on its way to the rest of the Minor Cyclades and Naxos. Respectively, on the same days, it departs from Naxos at 14:00, reaches Donoussa at 18:00, and continues to Amorgos. It’s a fact: sailing on “Scopelitis” is an experience in its own, with or without the strong winds!

*It would be a good idea to reconfirm over the phone, just to be on the safe side concerning the ships following this rather “unfrequented” route!