It is said that in order to truly learn a place, one should “walk” it. This sounds strange, indeed, today that wheels seem to have replaced our feet. However, it seems that Donousa is still persistently resisting. In order to reveal her beauties and secrets –which are numerous, take my word for it- she wants you to become a hiker. She wants you to become a traveller, an explorer. She will welcome you, no matter how you come. But, if you don’t “walk” her, if you don’t discover her secrets during all four seasons –not only in the summer- then you will have missed the best part of Donousa. 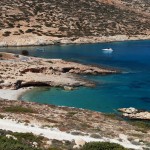 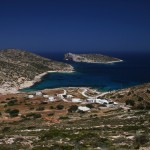 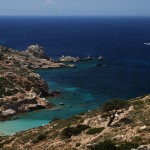 Donousa covers an area of 13,48 km2. On foot, you can go almost anywhere. Paths -half ruined, the truth is- lead you to places where the only sounds you hear are hawks, the wind and your own breath. Taking itineraries of spectacular beauty, all of a sudden you may discover an orchard in the heart of a valley, a spring spouting out of the rocks, the old mines, half-ruined houses where the people of Donousa first used to live. ..

Only a few people know the tracks. A lot of those were destroyed when the new road was built and crossed over them. Of course, this new paved road made the islanders’ life  much easier. However, it dramatically changed the scenery and destroyed paths which had taken a lot of pain and sweat in order to be opened by human hands one century ago. Ask and learn about these tracks and mainly about the ones that are still preserved and can lead you to places that otherwise you could not ever possibly discover. If we start walking these paths again, they will revive. And who knows? Maybe people will then realize that the preservation and retracing of paths in Donousa is not a romantic luxury. It is a need and a “must”.

The closest itinerary from Stavrós is a walk to the church of Panagia (Virgin Mary). Walking up the street which begins from the Pera Panta beach, you come to the church and feel as if you have reached the peak of the world! The open sea just in front of you: Amorgos, Keros, Koufonisi, Skinousa, Iraklia, Naxos. The sun at dusk, dressed in its royal purple colour, casts its magic spell on the world and your dreams…..

Passing by Panagia, you meet the path which leads you to the beach of Kedros. If you do not take the path and keep on going along the street, you meet Mesaria and the ruins of the upper and lower mill. Passing by the lower mill, a nearby path on the right leads to Vathi Limenari (pebbled beach) and to the site where the Neolithic settlement was found. 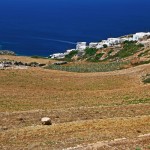 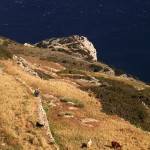 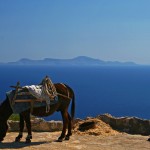 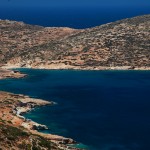 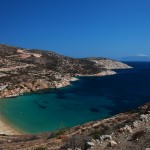 Following the ring road, you get to Agia Sophia (Saint Sophia), a little outside Mersini. A bit further, in the village, you meet another world. The people of Mersini, cattle breeders and farmers, are blessed for they can confront the world from the top. They are blessed for they live in a land where everything grows, where the water spouting from the mountain irrigates their orchards and makes you forget that you are on an island. Beneath the plane-tree spouts the spring. Around it there are fig trees, almond trees, pear trees, plum-trees, peach trees, apricot trees, vines, peppermint, honeysuckle, roses…Nothing is missing from this unique Promised Land, where every single step and every single dry-stone wall have been built with pain and wisdom, so as not to waste even one inch of land, even one drop of water. Walking down the path, you come to Livadi and Fikio.

Following the ring road and passing by Mersini, you arrive in Kaloritissa, the fourth and last village of Donousa. However, this is not the best itinerary. If you really want to visit this village which was only recently, in 2002, provided with electricity, you can set off from Stavrós. At the edge of the village, there is a road which  leads to the inner part of the island. You cross Donousa, walking through the foot of mountain Papas and seeing all the northern part of the island. This whole journey once could be made taking tracks. Unfortunately, it seems that only a few people favoured hiking and, as a result, the paths fell into disuse and were totally swept away by the bulldozer……

While walking in the mountain, you will meet the old mines. To your great surprise, you will find out that cedar-trees and lentisk-bushes can very well take root even in the rock; the same goes for savoury and rosemary, fig-trees, vine and olive trees. This one and a half hour’s hiking is indeed very rewarding! The remote village of  Kalotaritissa seems to have sprung out of the time machine. Here you can find the true meaning of life; here you will meet the “clear” eye of people. All three pebbly beaches sparkle. Mount Papas leans from above, giving the impression that it tries to protect you from the southwest wind “garbis” and, at the same time, from the indiscreet eyes of “civilization”.

All villages of the island can also be reached by car, using the ring road. However, moving in Donousa in a car is pretty like “going to the flea market dressed up for a gala dinner”! The western part of the island is also suitable for hiking, ending up at Aspros Cavos (=White Cape). No guiding required here. The passage is accessible. Wherever you find yourself, it is really worth it. From here you can come in view of Naxos, Htapodia, Mikonos, Dilos…
If you have the courage, ask for instructions about how you can climb up mountain Papas (383m). The sunset view from the island’s highest point is priceless! You will have the unique chance to watch the sun emerging out of the sea and the Aegean lying in front of you, all dressed in a red magical colour. In the background, straight ahead, lies Ikaria and Samos. A bit on the right, the small islands of Kinaros and Levitha. Right in front of you, Kalotaritissa and Skoulonisi. All you need is some luck, so that Aeolus (the god of winds) will not have woken up very early in the morning. For, when the Ikarion Sea gets wild and stormy, the horizon gets misty and the islands simply vanish…